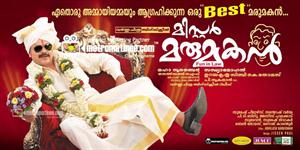 Five years after the forgettable film 'Kilukkam Kilukilukkam', Sandhya Mohan again teaming up with the Udayakrishna- Siby K Thomas duo to bring another family comedy. This time he has roped in 'Janpriya Nayakan' Dileep for the flick 'Mr. Marumakan'. As the title indicates, it's the story of a son-in-law. The film is coming with a few specialities. Two major actors from Tamil film industry are appearing in the film as pair. K Bhagyaraj, a big name from Tamil will be making his Malayalam debut as an actor. He has reportedly said that he is hoping to direct a Malayalam film soon. Khushboo, a familiar face, also handles an important role in the film. The other important thing is, Sanusha, once the baby star of Malayalam film-serial industry, is making her debut as a heroine in the film.

Dileep appears as Ashokraj, who is the heir of the family owning one of the most famous drama troupes of yesteryears- Bharatha Kalakshethram. Ashok is the younger son of Rajagopalan Thampy, played by Nedumudi Venu. Thampy is the current organiser of the defunct drama troupe which is based in Ottappalam. Ashok Raj shows his interest in reviving the troupe, though he is a lawyer by proffession. The troupe, once was a inevitable voice in the drama arena has been into deep waters when Dileep comes. As the first step to bring 'Bharathakalakshetram' to the mainstream again, Ashok starts directing and playing the lead of a play titled 'Dasavatharam'. To fit to the culture of the new generation drama system, Ashok alters his name to Ashok Chakravarthy. The troupe resumes its funcions well, but soon, financial problems start to push the trupe into troubles.

As a fuel to the fire Ashok's elder brother Baburaj (Biju Menon), an MBA holder, who runs a company which is now in a financial mess also enters to the scene. The entire family gets surrounded by debts and debtors. Everyone except Ashok gets very much upset and seem to be helpless. Now enters Balasubrahmanyam (Bhagyaraj), a bank officer who is in charge to initiate legal proceedings against Babu Raj and his company. The Bunglaw of the family is to be confiscated, since it was given as guarantee for the loan Baburaj has taken. It gets revealed that Balasubrahmanyam also has family problems as he is estranged from his egotistic wife Raja Mallika (Khushboo) and family. Mallika is a member of a wealthy family and is the daughter of haughty Raja Kokila (Sheela). Raja Kokila is the boss of Raja's group of companies. Balasubrahmanyam and Raja Mallika has a daughter Raja Lakshmi (Sanusha), who has completed her degree in fashion designing. She is also like her mother and grandmother, a little bit arrogant.

The trio, having too much of self confidence believes that women can easily lead the life, without the help of men. This makes Ashok Raj think and he decides play cards to make the bank officer delay the bank procedures. He enters in the lives of everyone and that make the ladies rethink of their principles. Parallely Ashok and Raja Lakshmi form interests in each other. The whole story is presented with the touch of humour.

Mr. Marumakan has got an ensemble cast including Dileep, Sanusha, Bhagyaraj, Sheela, Khushboo, Biju Menon, Nedumudi Venu and Suraj Venjaramoodu with others. It is supposed to hit the theatres as a deepavali release.

Football Friends is the next Malayalam movie which is ready to release on May 18th 2011. The movie features Mukesh and Kalabhavan Mani in lead roles. Read more to know about the story, lead cast, supporting cast and other facts about Football Friends movie.

Pathiramanal is an upcoming Malayalam movie which is in the process of shooting and is expected to be released in late 2011. Jayasurya has replaced Prithviraj as the hero of the movie. Read more to know the details, story, cast and technicians of Pathiramanal Malayalam movie.