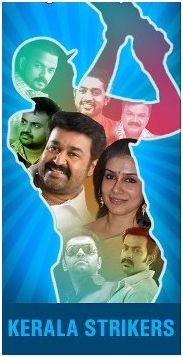 Mollywood Cinema stars Cricket team Kerala Strikers defeated Kerala's veteran Ranji team during the practice match played at Kaloor Jawahar Lal Nehru international Stadium on 24th October. The practice match was played in the absence of team captain Mohanlal and vice captain Indrajith. Actor Bala led the team in their absence. The match was played on international Twenty 20 cricket format. Kerala Strikers had defeated Bangalore team, Mudra in the practice match by six wickets. The winning streak in these two practice match will definitely give a great hope for the team in the second edition of the celebrity cricket league. Actually the match was organized on 23rd October, but the heavy rain fall on Sunday made the team members to post pond the match to Monday.

Kerala Strikers came to bat first in the absence of their major players. The match was played on International Twenty 20 format. Kerala Strikers acting captain Bala and Vivek opened batting for Kerala Strikers, but the team lost Bala's wicket in the second over. Then the batting performance shown by Vivek Gopalan and Rajiv Pilla enabled the team to make a good score and set an target of 130 runs for the Ranji veteran team. Jayaraj and Ecthin opened the batting for the Veteran team. But the team members found to sustain before the young team of Kochi Strikers and tasted the defeat before them. Team Captain Mohan Lal, Vice Captain Indrajith, Asif Ali and Kunchako Boban could not attend the match due to their scheduled shooting for their upcoming projects. Saiju Kurup, Manikuttan, Vivek Gopalan, Riyas, Ahmed, Prajod Kalabavan, Ranjith Menon, Vinu Mohan, Unni Mukundan, Rajiv Pillai, Nikhil, Nivin Poli and Munna were the other team members.

Actor Bala told that the current performance of the team is giving a huge faith for the team to win the second edition of the celebrity cricket league, CCL2. He also told that Karnataka and Chennai team is going to their main rivals in CCl2. The team manager Idavela Babu informed that his team has a great faith in getting the title of CCL2. The first match will be played on January 21st between Kerala strikers and Telegu Warriors at Hyderabad. Next two matches of Kerala strikers will be played at Sharjah, where there is a huge following of Indian films and film stars. Kerala strikers will play their second match against Mumbai heroes on 26th January and will meet Karnataka Bulldozers on 27th Jan. Their 4th match will be played against Bengal Tigers at Kochi on 29th. The last league will be played on Feb 4th against Chennai Rhinos in Kolkatta.