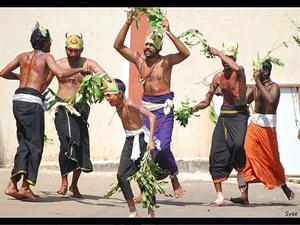 Erumeli in Kerala is a famous pilgrim centre. We malayalees are always familiar with Erumeli Petta Thullal. In Sabarimala pilgrimage, Erumeli is considered to be a holy place. Sree Dharmashastha Temple Erumeli is a famous temple located here. It's important to note that all Sabarimala pilgrims who are going to Sabarimala Lord Ayyappa Temple visit this Erumeli. We can also say that Erumeli is located at a distance of 95km from Cochin, 140km from Thiruvananthapuram, 50km from Kottayam, 12km from Mundakkayam, 20km from Ranni, 70km from Kumily and 15km from Kanjirappally respectively. I think majority of the people know the fact that Erumeli Petta Thullal is also known as the Erumeli pettakettu.

The nearest railway stations to Erumeli are located at places like Chengannur, Changanacherry and Kottayam while Kochi International Airport is the nearest airport to Erumeli.

At Erumeli, the Ayyappa devotees visit the Vavar Swamy at Nainar Masjid Erumeli, which is located opposite to Erumeli Cheriyambalam, before they visit Ayyappa Swami. It is believed that Vavar Swami is the companion of Ayyappa. These devotees, from Nainar Masjid Erumeli visit the cheriya ambalam and valiya ambalam. So the interesting fact is that devotees visit this Vavar Swamy and Valiya Ambalams in the form of a dance, which is popularly known as the Erumeli Petta Thullal. The persons who perform this Petta Thullal, color themselves, holding wooden arrows and bows. There is a myth behind Erumeli Petta Thullal. It is believed that Lord Ayyappa Swamy killed Mahishi, who was the sister of Mahishasur. Ayyappa Swamy got the help of local tribals, for killing mahishi and after that the tribal people danced in joy. So in remembrance of the joyful dance performed by tribal people, the Erumeli Petta Thullal is conducted.

In simple terms we can say that Erumeli Petta Thullal is an important event in Sabarimala Pilgrimage.

The 2012 Erumeli Petta Thullal date is 12 January. For the Erumeli Peta Thullal Rituals, there will be two teams namely the Ambalapuzha team and the Alangattu team. It should be noted that the Ambalapuzha team led by Chandrashekharan Nair will be taken out from Erumeli Kochambalam to Erumeli Sree Dharma Sashtha Temple at 12:00 noon. This will be done after they Sree Krishnaparunthu in the sky. But the Alangattu team led by Vijayakumar Menon will be taken out from Kochambalam to Erumeli Sree Dharma Sastha Temple at 2:00PM. This will be done only after they see star in the sky. Erumeli Petta Thullal is performed in front of the Petta Sri Dharmasastha Temple and the Erumeli Vavar Mosque. The Ambalapuzha team uses green, black as well as kumkum color to paint their body while the Alangattu team uses only black color dress and they don't wear a cloth on the head and instead of this they use irumudi kettu only. So by concluding we can say that Erumeli Petta Thullal is a religious ritual that is mainly performed by hindu devotees as part of their Sabarimala pilgrimage.