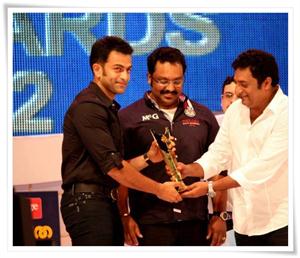 Mazhavil Manorama, a much popular general entertainment Malayalam channel from the house of Malayala Manorama will telecast the 'Vanitha Film Awards 2012' on March 31st (Saturday) and April 1st (Sunday) from 6:30 PM onwards. Vanitha being one of the popular women's magazine all over Kerala do honour the brilliant artistic and technical excellence of talents in Malayalam movie Industry every year. Vanitha award show had won the hearts of millions of viewers making it one of the popular award ceremonies. It's much true that Keralaites have a passion to watch their stars being greeted with awards.

Heading a step forward the 8th edition of Vanitha Film Awards was held at Wellington Ground, Cochin on 12th February 2012 which was attended by the popular artists representing malayalam, tamil and bollywood movies. Percept Media, the team behind the show since its inception years back, did have conducted the event much wisely making it a grand success. Percept Activ (business unit of Percept Media) did handled overall management of the programme which included production, technical, content and artist management.

The 'Vanitha Film Awards 2012' mega show had got the real taste for the eyeballs with a bunch of performance of artists representing malayalam, tamil and bollywood film Industry. The highlight of this year was the mesmeric act by Bollywood actress Neha Dhupia, playback singer Sunidhi Chauhan with her magical voice, tollywood actor Dhanush with Kolavari Di, playback singer Naresh Iyer with his numbers, outstanding performance from Blaaze etc. Adding more colours to the show cricketer Shreesanth, actress Amala Paul and Priya Mani did enthrall the huge gathering with their dance. Australian Pyro Act did give a real visual treat making it a great evening. Other than this, there were many other programmes making it a delightful night for the audience.

Mazhavil Manorama is telecasting the 'Vanitha Film Awards 2012' on March 31st (Saturday) and April 1st (Sunday) from 6:30 PM onwards as two episodes. So it's a great time for the millions of television viewers to watch back to back episodes of this award night right before their eyes. You can tune into Mazhavil Manorama on the given time to get enthralled. You can also watch the 'Vanitha Film Awards 2012' online through the websites which stream the channel. Check for the websites and get ready to enjoy hours of entertainment.

Josco Indian Voice finalists gearing up for the Grand Finale

Do not miss to watch Josco Indian Voice Grand Finale live on 13th October 2012 to be telecast on Mazhavil Manorama channel and those online streaming channels. As the 6 finalists are gearing up to enthrall the audience who is eagerly waiting to get the show being. It would be Bibin, Priya, Siyad, Selin, Vishnu and Sreeranjini who would join the party for the mega show. Read more to know about Josco Indian Voice grand finale.