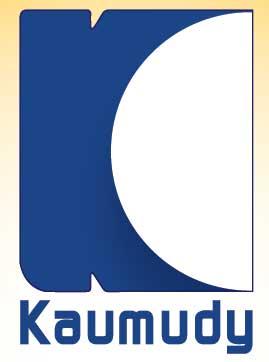 Recently we can see many printed media are making their part in visual media also. It includes the famous printed Medias like Malayala Manorama, Madhyamam and Mathrubhumi. We have already given exclusive reports of these channels. Now the Kerala Kaumudi is also trying their luck in visual media through their new channel Kaumudi TV.

The Kaumudi TV has been introduced as Kerala Kaumudi's hundredth birthday gift. Kerala Kaumudi was established in 1911 by C.V Kunhiraman and K. Sukumaran. In 2011 Kerala Kaumudi is celebrating its100th birthday. In this long hundred years the newspaper has conquered many heights. Now they are entering to the visual media.

The first private channel from Kerala was Asianet which was established in 1994. After this several channels come from Kerala. The number of channel from Kerala is increasing in an exponential manner. Many printed Medias are entering to visual media. Malayala Manorama was the first printed media to enter in visual business. Then Mathrubhumi, Madhyamam, Mangalam and Kerala Kaumudi followed this path. In addition to this many film stars, political parties and journalists are also entering to the same business. Anyway Malayalees are going to get a good visual treat when these channels compete with one another. With the coming of new Malayalam channels the cable TV operators are going to suffer a lot. This is because most cable operators provide only 60 channels. Thus they may find much difficulty in including all Malayalam channels and other important channels within this 60 limit. The cost of advertisements will also reduce when the number of channels increases. When they have lots of space for advertisements they need only less money for their advertisements.

We are trying to include the news of all the latest channels here. We have already prepared the exclusive reports of Darshana TV, Mazhavil Manorama, Channel from Madhyamam, Reporter, Kochu TV etc. So keep in touch with us to know the latest reports of all upcoming channels.