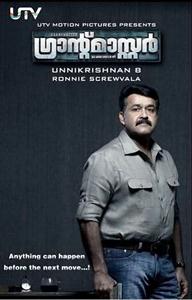 After the hit Madambi, Director B Unnikrishnan and Superstar Mohanlal are joining hands for the new Malayalam film Grandmaster. Mohanlal, who didn't have much success in the previous year is keen to have a break with a couple of new movies. That makes Grandmaster so critical to both him and his fans.

Grandmaster is an investigation thriller in which Mohanlal dons the role of an IPS officer. He is portraying Inspector General Chandrasekharan. Mohanlal is playing a police officer after a couple of years. Grandmaster will not be just another police movie packed with action sequences and breath taking dialogues. It won't have the excess of heroism. Moreover, it is 'mind game' which have needed action sequences. Mohanlal has got a new getup for the movie. He is playing a man who has had so many losses in life. The film portrays his chase of a serial killer.

Priyamani is the heroine of the movie. She plays the wife of IG Chandrasekhar, who is a criminal lawyer. Noted young actor Narain also portrays an important role as an IPS officer. Anoop Menon, Roma, Devan, Babu Antony, Mitra and Jagathy Sreekumar are the other major actors. Director B Unnikrishnan himself has scripted the movie. He assures that there will be unexpected twists and turns in the movie. The Cinematography is by Vinod Ellampally. Deepak Dev composes the music for the movie.

Grandmaster is produced by UTV Motion Pictures, one of the biggest production houses in India. The movie will hit the theatres on 3rd May, 2012.

The story, cast, crew and release date of upcoming Malayalam movie Grandmaster is added here. Grandmaster is directed by B Unnikrishnan and stars Superstar Mohanlal and Priyamani in lead roles. The movie tells a police story. Read more details below.

Superstar Mohanlal as Casannova - The Prince of Love

Superstar Mohanlal is coming as Casannova. The big budget movie is directed by Rosshan Andrrews. Casannova is scripted by Boby-Sanjay duo. Read the story, cast, crew and other news about the film in the article.

Mohanlal - The versatile actor and iconic hero of malayalam

Read about Mohanlal,the versatile actor and iconic hero of malayalam. Mohanlal is the most popular actor in south India. More than an actor he is also film producer, distributor ad entrepreneur. Here is including profile, biography and upcoming movies of Mohanlal.

Casanovva 'most expected malayalam movie in 2012' release on 26th January