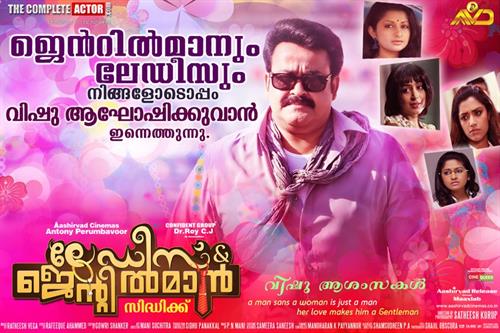 Finally the wait for the most majestic malayalam movie is over as Siddique -Mohanlal duo is gearing up to provide all the excitement and thrills stored for the past 20 years. The much hyped movie 'Ladies and Gentleman' shouldered by Siddique will be released in more than 100 theatres including those in Chennai and Bangalore. For Mohanlal, the movie would be the third release in 2013 after Lokpal and Red Wine.

On the other side Siddique became fame crossing all borders after the viral success of 'Body Guard'. The Salman Khan starrer movie was declared as a blockbuster making a gross collection of 230 crore. So while the super director and the great actor joins for a project after 2 decades (Vietnam Colony in 1992 directed by Siddique-Lal) the exhilaration is on the peak. With two more days left for Vishu, a prominent festival of Kerala, the whole team behind the movie put forward it as a perfect Vishu Kaineettam for all malayalis around the globe.

Ladies and Gentleman tells the tale of Chandrabose (Mohanlal), a delightful gentleman who influences the lives of young women around him. Anu(Mamta Mohandas), Achu (Meera Jasmine), Jyothi(Padma Priya) and Chinnu(Mitra Kurien) are the four ladies. Achu is running an IT company while Anu and Chinnu too belongs to IT field. Sarath(Krish J Sathar) is always live in front to give complete assistance to these ladies. 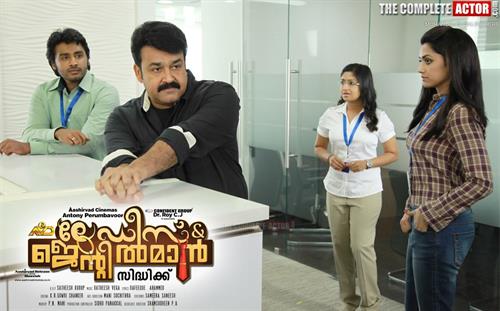 During their life journey, the four ladies get close to Chandrabose. The strong bond developed between Chandrabose and the ladies takes the story to the next phase. Being a gifted gentleman, Chandrabose through his unique pattern of engaging with the mass do influence the later life of the four women. The film which is fashioned as a clean family entertainer will leave out a strong message about keeping positive attitude in life.

From the words of director Siddique the story of 'Ladies and Gentleman' gives positive and freshness in the mind of viewers who wish that they had someone like Chandrabose (Mohanlal) in their life. The inherent graciousness of Chandrabose will move the story forward. As the younger generation is too ambitious and self-centred, they fail to win success or get shattered by the first setback in their life. But the older generation act less selfish tackle both ends with more calmness and maturity. The movie which looks through this perspective will be a fun treat for the fun loving viewers.

Produced by Anotony Perumbavoor, the movie got released on 12th April 2013. Blessed with the majestic combo of Rafeeq Ahmed and Ratheesh Vega, cinematography stood safe in the hands of Satish Kurup. Under the production house of Ashirvad Productions, the movie has been produced by Antony Perumbavoor and C J Roy. Siddique himself has handled the story and screenplay for the Rs 10 Crore budget movie. Being the most expensive malayalam movie produced in 2013, the producers have already got a profit of Rs 1.5 Crore even before its release. Even the combined for the lead actor and the director can be taken up as 2.7 crore, Rs 11. 5 crores got in return from satellite (Rs 3.5 Crore), remake and overseas rights (1 Crore).

Ladies and Gentleman is a pure Vishu kaineetam from Siddique – Mohanlal after they teamed for a movie which has all the essence to keep the audience intact. Flavoured with comedy, thriller and suspense, the movie would be a perfect choice for this Vishu. Siddique has wisely used the acting brilliance of Mohanlal who is much known for his majestic way of performing before the silver screen.

The movie starts with a ‘Nadan Paattu’ starting Pallivalu penned by debutant Salavoodheen Kecheri. Mohanlal’s introduction was too awe-inspiring with the actor giving out his charismatic act. The first half of the movie kept the story interesting with many situations which can tickle your funny bones. Even though Mohanlal was presented as a drunkard in his previous flicks like Ayal Kadha Ezhuthukayaanu and Spirit, the character in this movie stood much ahead of others. 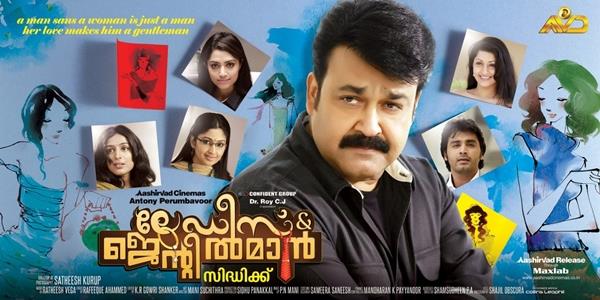 Mohanlal as an actor had done a terrific role with his drunken acts shouldered major part of the humour scenes which was lively supported by Kalabhavan Shajoon. As the story and screenplay do play a vital role in winning the heart of the audience, Siddique who is known for his loophole free script could had done little more better while considering his solid works in the past.

Siddique had quite healthily managed to keep the suspense much effectively with one well executed before the interval and other in the climax. Even though the first half can be perfectly enjoyed, the loose script and aimless narration may keep you leave out of the cage. The long line of characters fitted inside with unwanted sequences could have been chopped out to reduce the length of the movie. Other than Mohanal, the lead ladies too had a huge scope to perform well. Among them Mamta Mohandas who donned the role of the head of an IT company did her job with dedication while the other heroines Padmapriya and Mithra Kurian didn’t had much to perform. Meera Jasmine could handle the role with maturity was really like ‘a fish out of the tank’.

Krish Sathar, who made his acting debut do need a long way to go before taking acting as a profession. As an engineering student and IT professional, Krish couldn’t do justice to the much lengthy role offered to him. The other characters didn’t have much to do other than filling the gap in between the scenes.

Considering the songs and background score, Ratheesh Vega couldn’t continue his magic spread over ‘Run Baby Run’. As music played an important role being the soul of Siddique’s movies, the songs could have been done better. Any way Deepak Dev had done his job well with the background score. Satheesh Kurup who had got a lot of applause standing behind the screen as cinematographer was good but not fair compared his works with ‘Pranayam’. The movie would have been done better if the director could add professionals to work in the editing and makeup department.

Ladies and Gentleman can be perfect choice for this Vishu season if not considering the flaws which could be avoided. The movie would successfully run for a couple of weeks without any doubt, but the final fate depends upon the other Vishu releases Shama Prasad's English and Rajeev Kumar's suspense thriller Oral Mukalil Undu which are expected to get released next week.

Any way the movie will not disappoint you and will be a clean entertainer which can be enjoyed with your family.

again a nice movie from Siddique. He made a comedy movie of a super star with only a single comedy support actor.
Well done Mr. Siddique.