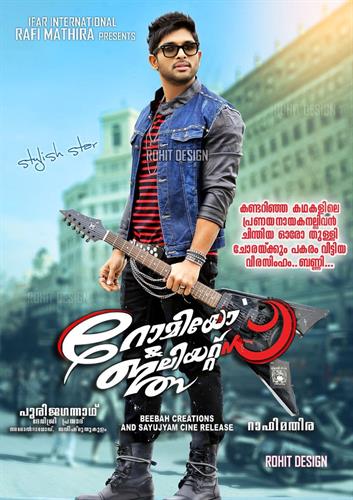 After one year, stylish star Allu Arjun is aback with his new film "Romeo & Juliet" directed by super hit Telugu director Puri Jaganath. The film was released all over the country on 31st May. It meets all the expectations of the fans in Kerala and Andhra Pradesh. All the fans association members of Allu Arjun celebrated the release of this movie like a festival at various major releasing centers in Kerala. In a single word we can tell that the Romeo and Juliet is a real romantic entertainer.

The combination of Allu Arjun and Amala paul was excellent as each of the romantic scenes in the film is good enough to create a feel among the audience. It's actually a romantic action thriller that tells the story of Sanju Reddy who is settled in spain. We know that the Allu arjun is quite popular in Kerala even though he is an outsider to us. This trend is only because of his ability to attract the viewers of our state.

The major highlighted feature of this film is that, Amala Paul performed as lead actress in this movie. The film produced by Bandla Ganesh has proved that it is an all round entertainer movie that makes all type of viewers happy. Puri Jaganath is a lead director in telugu film industry who earlier directed the movie Bunny staring Allu Arjun. The Romeo and Juliet hit the theaters simultaneously in Kerala and Andhra Pradesh today. The camera handled very beautifully in this film as each romantic scene makes audience to feel the situations. More over the songs are also composed well by Devi Sree Prasad. The actress Catherin Teresa played quite glamorous role in this film.

The actions scenes and dance are extra ordinary and makes this film a complete entertainer. We know that, the previous film of Allu Arjun, Gajapokkiri failed to entertain the viewers of Kerala. But Romeo and Juliet compensate that lose and will definitely place a position in the hit chart of 2013. The story of the movie is about a lead guitarist Sanju and his love to a Traditional Brahmin girl (Amala Paul).

The first half of the movie is about the romance of both and the challenges they faced from an underworld gang. Second half is too good and interesting as it includes suspense sequences and good actions of Allu Arjun. Even though the movie focused on youngsters, with family also you can watch this movie as it include good romance, family story, and various emotional sequences. Brahmanandam, Nassar, Ali are also played their role well in this movie.

The story of this film is about the life of guitarist Sanju who settled in Spain. The movie starts with entry of the actress Akanksha (Catherin) who played the role of a Indian politician's daughter. She is graduate in psychology and joined in college in Spain for further studies. At her residence in Spain, she reads a personal dairy of the previous owner (Amala Paul) of that room. Akanksha likes Sanju's love story with that girl. The most important thing about the film is that, it's a believable script to the viewers and will definitely make the audience satisfied. Akanksha read the diary completely and moved with their life. 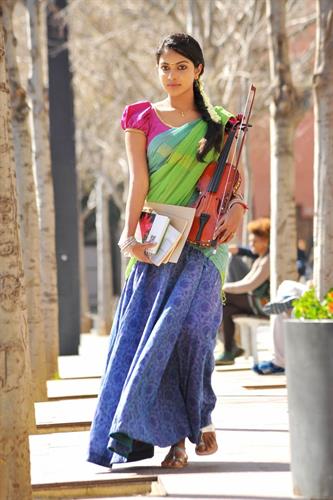 The comali role played by Amala paul with all her efforts in best possible way. She looks very pretty and beautiful in this movie. Her emotions and expressions with situations are appreciable as she made a very good attempt to deliver the character. The Sanju falls in love with a traditional Brahmin girl ( Amala Paul) and express love to her directly. Catherin looks gorgeous in this movie as her costumes and looks make youngsters crazy. The film involves two action sequences mainly and Allu performed very well those stunts. At some situations the writing in the dairy ends and Akanksha becomes curious to know the remaining story of Sanju.

The story goes through the underworld don who stolen crores of rupees from India with help of Akanksha's father. In the second half, the Akanksha falls in love with Sanju and propose him to marry her. But the suspense of the movie starts there and sanju take his revenge to kill all the underworld dons by makes use of Akanksha. The story meets all the essence to entertain the viewers as good dance sequences, actions, romance, suspense, emotions included in this film. The performance of stylish star is good and up to the standard. But the Catherin was not good in acting and she entertained the audience just with her glamour.

The film is very good from the technical side as the camera and action sequences are very well taken by the director Puri Jangannath and his crew. The smoothness nature of the cinematography, editing makes the film a standard one in south India. The beats of Devisree Prasad are also meets the expectations of the film. The heavy dialogs from the Allu sometimes make us uncomfortable and boring. Anyway the dobbing of this film from telugu is an appreciable task and that done very well by the distributers in Kerala.

The placing of the songs is not good in this movie as lots of dance sequences included without any need to the situations. The comedy is not worked out well in the movie. While watching movie you may feel that this movie concentrates to enhance the new trends of costumes among youth. The director mainly focused on masala entertainment rather than the beauty of the story. The presentation style of the film is good task and will make us satisfied.
SPK Rating : 7/10
SPK Verdict : Youth entertainer