Kalidasa Kala Kendra which had made their prominent presence in the malayalam drama field for the past 5 decades is gearing up to reach their second venture onto the silver screen. After 'Hide N Seek', Kalidasa International is all set to entertain the audience with his next project which is being helmed by Jahangir Shams. 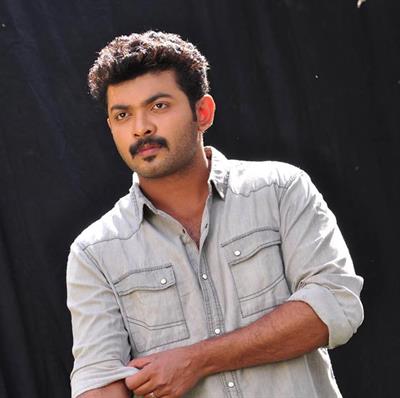 Titled 'Karanavar', the movie is currently progressing at Mankara House situated at Ottapalam. It is considered to be a lucky charm for the filmmakers as movies like Mohanlal's 'Balettan' and Mammotty's 'Vesham' shot at Mankara won the hearts of the spectators. 'Karnavar' is a complete project from Kalidasa Kala Kendra. Sukumaran( E A Rajendran) is a prominent person in a village. He is much liked by the villagers for his enormous support in various problems of the village.

One day while the family was going through a depressed situation, 8 year old Mani tells an opinion which opens way to new rays of hope in their life. As the elder brother Sathyan leaves home, the grandmother declared Mani as the 'Karnavar' who was proposed to take decisions for the family. Mani who was brought up with huge responsibilities was liked by his father's friends.

His love interest Ammu(Sreelakshmi Sreekumar) give full support in his life. Some exciting incidents which happen later period form the crux of the movie. The movie is scripted by Hemath Kumar who has won various awards and other achievements for his dedication in scripting stage plays.

The movie is being produced by Sandya Rajendran under the banner Kalidasa International. For the lyrics of O N V Kurup and Chandranshekaran Engandiyoor, the music is being set by Ousepachan. The camera is handled by Sajith Menon. It would be the second project of Jahangir Shams who earlier has directed the movie 'Teens'.