After delivering a couple of short ventures, Padmasree Media is teaming up for a one hour feature film. Directed by debutante Kiran Anilkumar, the movie titled 'Anthy Koodasha' is scripted by Sooraj Sukumar Nair tells an interesting love story creamed with suspense and thrills. 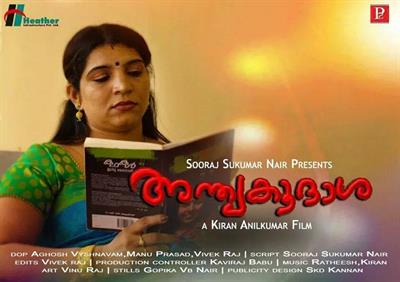 Vinu Raj, Ganesh Krishna and Meera Nair would give life to prominent characters in the movie. Much interestingly, Saritha S Nair plays a significant role in this project. Even though she did not take up the project in the initial stage, the production team convinced her about the signature role.

She gives life to middle aged women, the mother of 20 year old youngster. Reportedly, Saritha took up the role with ease and done the first shot with much perfection. Meera Nair who has appeared in the movies like 'Rathi Nirvedham' and 'Black Butterfly' will be handling a prominent role in 'Anthyakoodasha'. The shooting of the movie is currently progressing in the outskirts of Thiruvanathapuram.

The camera is being handled by Manu Prasad and Vivek Raj. Ratheesh and Kiran handled the music department. Padmasree Media, which has already produced short films like 'News', 'Six Pack' and Otta Oruthiyum Sherialla' aims to reach this feature film by November. A song featuring the lead actors sung by Nikhil Mathew was shot at Dhanushkodi, Rameshwaram and Kovilpetty.

The song has been picturized by celebrity photographer Agosh Vyshnavam. The art works are handed Vinuraj and editing by Vivek Raj. With dreams to make their own space in the malayalam film industry, a vibrant team stay behind this new venture. With an experience of working with short films, these youngsters stored with huge potential will be an asset in the future to come. Kiran who has directed various short films has used his experience in this upcoming project.

Can Saritha turn to be a big screen celebrity too? Let us wait and see. 'Anthyakoodasha' produced by Sooraj Sukumar Nair under the banner of Padmasree Media is slated for November release.