Filmmaker Rixon Xavier's debutant movie 'Aakashangalil' with a tagline You can never love without giving is getting ready to reach theatres. Scripted by the director himself, the movie will have Shankar in lead. Aakashangalil' zooms into the life of retired Air Hostess Amala. 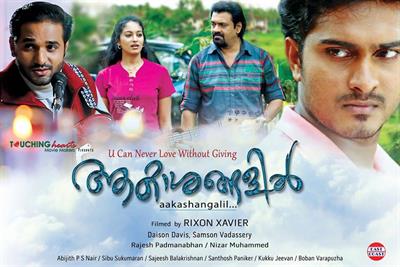 Amala (Pooja Vijayam), a retired air hostess started her life with a pilot, but the relationship broke up for some personal reasons. As the marriage with her colleague, a pilot was a failure and it got divorced, she lives with Madhuri at Kochi. She advised Amala to share life with rich bags. But Amala was not interested to have such a life.

Later she becomes close to her driver Ananthu. She finally discovers real love in the young man. As Ananthu's family was against this relationship as well as marriage, they find hard to live together. During the time, Amala's old friend Devadathan (Shankar) who is also a divorcee comes forward to lend a life to Amala.

Renjith Raj who has portrayed the character James in the serial Autograph will be seen in a prominent role in this movie. The shooting of 'Aakashangalil' was carried out at Vagamon and Ernakulam. The movie is being produced by Daison Davis and Samson Vadaserry under the banner Touching Hearts Movie Makers. The movie gives much preference to music. For the lyrics of Radhamani Parameshwaran, Jayakumar, K Pavithran and Rixon Xavior, the tunes have been set by Abhijith P S Nair.

Shankar made a strong come back with 'Naku Penda Naku Taka' directed by Vayalar Madhavan Kutty. He will play a prominent character in this movie. Meanwhile his directorial venture 'Sand City' will soon reach theatres after the final cut.