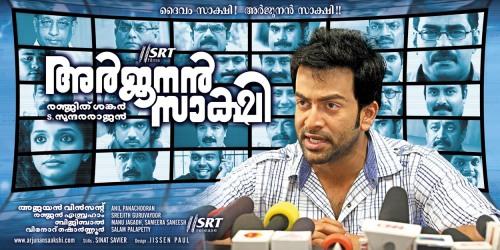 Arjunan Sakshi - Prithviraj's latest Malayalam film has released all over Kerala in nearly 70 theaters today (28th January). This is the second film from Ranjith Sankar after his super hit debut film Passenger. Arjunan Sakshi got a warm reception from fans of Prithviraj. Prithviraj is playing the character of a young architect Roy Mathew in the film. Director Ranjith Sankar calls Arjunan Sakshi is a socio-thriller. The film deals with the present day life of Kerala, where everyone conveniently forgets his/her social commitment. But Arjunan witnesses all these changes. 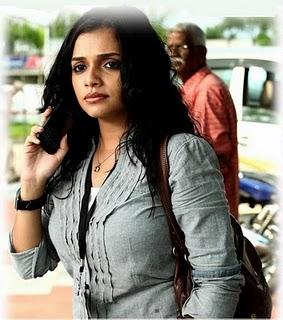 Cast and Crew of Arjunan Sakshi

Prithviraj is playing the role of Roy Mathew. Then definitely a question arises: Who is Arjunan? According to the director of Arjunan Sakshi, Arjunan is just a concept and is not a character. Arjunan may be anyone who's watching all these changes in our God's own country. Ranjith Sankar also added that Arjunan is not a surprise element in the movie. But still suspense lies in it, who's Arjunan? Is it Prithviraj or someone else.

Roy Mathew is is a young architect who is very fond of Kerala. Although he loves Kerala the most than any place in the world, he is not living there due to some business matters. He used to find time to visit the God's own country to enjoy its natural beauty. Once Roy gets a business opportunity in Kerala and he shifts his residence to Kerala. He is very thrilled about the new project as he is backing home to his land. But, things never came as he expected. He saw a different state and people- a real contrast from his thoughts and dreams. There he meets a new person- Arjunan.

Ann Augustine is playing the female lead role in this movie.She's handling the character of an investigative journalist in Arjunan Sakshi. Other casting includes Bijue Menon, Jagathy, Nedumudi etc.

During his harsh life in Kochi, dealing with business Roy happened to witness a crime, rather a brutal crime. Roy shares the detail about the crime to media and public. From this point onwards, he becomes a victim of the devil world. He wants to change his life from there onwards and from this point onwards, the movie takes viewers to a new height. The film has got two suspense -1. Who is Arjunan? Is it Roy Mathew or someone else helping Roy. 2. As the director said, it's not Arjunan, but the crime that Roy had witnessed is the biggest suspense in the movie.

Inspiration and Concept of Arjunan Sakshi

The concept of Arjunan Sakshi is none other than the wastage of resources/ failure to fulfill announced projects by the Government and the people of Kerala. The concept came to his mind in 1990 when he was an engineering student. Director Ranjith Sankar says that he was very happy seeing a new and impending tram project from Aluva to Kochi when he was a student. But the worst thing about that project is that it never came into existence and slowly slowly people started to forget that promising project. This is not the single case, there are still more of its kind happening in Kerala. This makes Kerala different from other states and Arjunan Sakshi is Ranjith Sankar's effort to portrait the real Kerala to its people.

Arjunan Sakshi is a film released with much expectation. The first film of director Ranjit Sankar was unbelievingly beautiful thriller in Malayalam industry and critics said it was the sign of change in Mollywood. When the same director is penning the script and directing the movie, people will expect much.

Arjunan Sakshi is getting a mixed response from the viewers. Some audience says that the film is not at the level of Passenger. Although the director could present another good theme, the film lacks momentum in many scenes. Prithviraj looks stylish in the film. In fact, he is in a great need of a good film after the flops his two recent films. But Arjunan Sakshi is the one and only film released in Mollywood with some social commitment. This makes Arjunan Sakshi a different one. The fight scenes and technical perfection of the movie are other two features one has to appreciate.
Anyway, let's wait and find what the real fate of Arjunan Sakshi is.