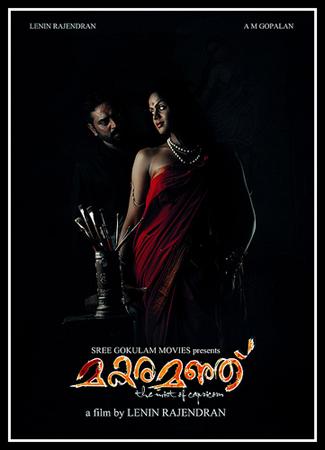 Makaramanju is the latest Malayalam movie which has hit the theatres on 20th May 2011. The ace cinematographer Santhosh Sivan plays the role of Raja Ravi Varma, the celebrated painter. The film has been directed by art director Lenin Rajendran and Karthika Nair plays the heroine in the movie. Karthika Nair, who is the daughter of yesteryear actress Radha, will be portraying two characters, one is the artist's muse for the painting and the other is the role of Urvashi. The name Makaramanju means 'The mist of Capricorn'. 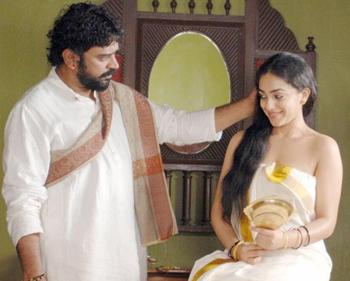 The story revolves around the love stories of a painter and his creation. The painter Raja Ravi Varma is in the process of painting a masterpiece. The painting's theme is that of the Pururavasu, the renowned king who fell in love with the beautiful nymph Urvasi. Urvashi was sent to the earth in form of a village belle by the celestial beings who were not happy about the fact that Pururavasu was able to communicate with nature, birds and animals and they wanted to break this charm that the king possessed. When the king professes his love to Urvashi, she agrees to become his wife if certain conditions are fulfilled but she disappears from the scene when she realises that the conditions have been broken. A shattered Pururavasu roams around the entire place searching for his lost love and finally succeeds in finding her. This is one of the love stories. The other part is that of the painter of the masterpiece, Raja Ravi Varma who gets attracted to his model Anjali (Karthika) and both of them become passionately in love with each other. They find it difficult to detach from each other. The love of the painter and his model acquires certain shades from the painting of Urvashi and Pururavasu.

Makaramanju is Karthika Nair's first film and this film is expected to become a good beginning for her in the film industry. It is also Santhosh Sivan's debut film as an actor and he agreed to do the film only because it was a story of Raja Ravi Varma. Jagathy Sreekumar plays the role of Govardhandas Makhanji, Raja Ravi Varma's business partner who plays a vital role in the painter's career. Bala portrays the role of Raja Raja Varma, Ravi Varma's younger brother who himself is a fantastic painter and becomes happy when he gives the finishing touches to his brother's paintings. Lakshmi Sharma plays the role of Bhageerathi, Ravi Varma's wife who is a very beautiful woman but is very perturbed by her husband's relationship with the model. Chithra Iyer essays the role of Rukku Bhai, Anjali's mother. The music for Makaramanju has been composed by Ramesh Narayanan and the lyrics are penned by Kavaalam Narayana Panicker and K. Jayakumar. Makaramanju narrates a love that surpasses time and moves towards a point when myth and reality unites.