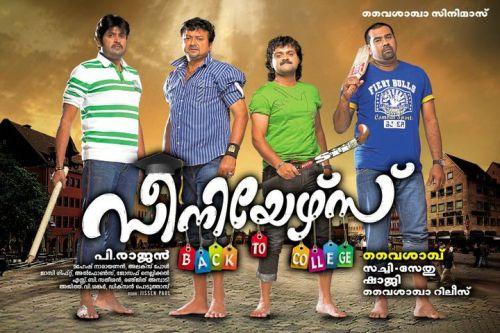 The story of the movie is about Padbanabhan (Jayaram),Philip Edikulla(Biju Menon), Munna Rashid (Manoj K. Jayan), Rex Manual (Kunchacko Boban) who had been think friends and had studied in the same campus 14 years ago. After their college life they were separated and were living independently.

Rex(Kunchako Boban) has a passion to music and his life is supported with earning from a shop which sells musical instruments. Rashid runs a ladies store business and Philip Edikulla is doing agriculture. One day all 4 friends came together with new activities, they brought up a new idea to join the college for PG, in Maharaja College for MA Philosophy. With the influence of Padmanabhan all the friends join the college for further studies. The movie brings some U- Turn as some incidents happens in the life of the four after they join the college. Its truly a comic, fun and suspense movie.

"This movie seniors will be a 100% entertainer with the presence of the major actors in this movie. It's a must see movie in Malayalam comedy films".

Yes am of the same view to that of Webmaster.

The movie is awesome, the music played in it is fantastic and has a nostalgic touch.

The movie goes fine until its end, and also has a suspense which is revealed at the end.