Vadamalli is the latest Malayalam movie which will hit the theatres in May 2011. The film has been directed by Albert Antoni who debuted with the award winning film Kanne Madanguka. Vadamalli has been produced by Sunil Chandrika Nair, the producer of the popular movie Kandahar. The lead roles are played by four newcomers, Rahul Madhav, Richa, Ramesh and Niji Mary. The story of Vadamalli revolves around a music college campus. The film is sure to be entertaining for the young generation. The shooting locations for Vadamalli includes Kochi, Alappuzha, Athirappilly and Munnar. Richa, who is basically from Dehradun, came into the limelight as the model for Bhima jewellery. Rahul Madhav is also not basically from Kerala. His native place is Mangalore but has been modelling in Kozhikode since few years. Rahul has also acted in two Tamil films earlier. The script for Vadamalli has been written by two young journalists, Rajesh Varma and Laser Shine. 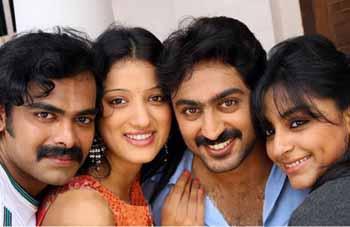 The roles enacted by the lead actors are of a missing girl, a drug smuggler, a music lover and a girl who left her home. The film is filled with beautiful songs and locations set in a college campus background which will surely enchant today's youth. Beethoven High Tech music college is the main point of the story. The names of the main characters are Sandesh Veerendra, Vrinda Nambiar and Renuka. The drug smuggler's name is Vasu Damodar. All these four characters incidentally get involved in some happenings that take place within the campus. An unexpected twist takes place in the story when a student called Siddharth, who was settled in U.S, arrives at the campus. The newcomers in Vadamalli are Rahul Madhav, Richa Panai, Niji Mary, Ramesh Raveendran, Pradeep Chandran and Jyothi Chatterji.

The camera for this film has been set by the well known cinematographer of the Tamil film industry, Vaidy S Pillai. The editing for Vadamalli has been fantastically done by the National Award winner, (for Tamil movie Paruthiveeran) Raja Mohammed. There are many more well known technical experts who play their parts with perfection for Vadamalli. Shivakumar, the person who excelled in audio graphing Yanthiran is the audiographer for this film. Sethu, who is also a National award winner and has designed the sound for blockbuster movies like Raavan and Guru is the sound designer for Vadamalli. The music for this movie has been composed by the famous musician Shyam. The digital dubbing of Vadamalli has been done in the studio of the musical maestro, A.R Rahman. Even the action director for this film is none other than the famous Anal Arasu who has already proven his mettle through his earlier films in Tamil. With a set of talented technicians and promising fresh newcomers, the film is sure to be a success and worth-watching.