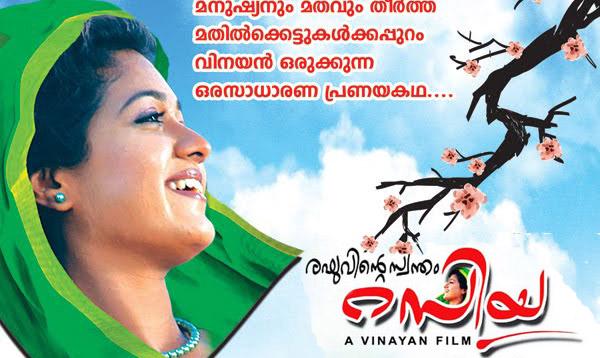 Raghuvinte Swantham Rasiya is a love story which tries to succeed under all odds. This film is actually based on a controversial subject related to religious terrorism. Both the hero and heroine of the film are fresh newcomers. The lead role is portrayed by debutante Murali Krishnan by the name of Raghu. The heroine of this film is Meghna Raj. Important roles will be played by both the veteran actors, Thilakan and Charuhassan. Thilakan will essay the role of a freedom fighter named Kuttappan Bhagavathar, who is also a close relative of Raghu. Charuhassan will be seen as a fighter against religious extremism in the name of Bappu Musaliar and is also a influential leader in Rasiya's family. The film will be released on May 13th 2011.

Raghuvinte Swantham Rasiya is not just an ordinary love story. Though it sounds just like any other love story shown on the big screen, the highlight of this film is its climax and also the way the love story has been handled. New techniques and methods have been used to show the love story which adds a different interesting concept to this movie. The boy and the girl hail from different castes (Hindu and Muslim). Their love story becomes a major cause for a heated argument between the two families and also in the society in which they live. This argument forces Raghu and Rasiya to leave their house and wander in the streets. The character of Rasiya is essayed by Meghna Raj. The story and script of Raghuvinte Swantham Rasiya was written by the director Vinayan himself. The supporting cast of this film includes Gautham, Spadikam George, Sudheer Nair, Lakshmi Menon and Roselyn. The music for this film is composed by Sajan Madhav and Yousuf Ali Kechery has penned the lyrics. Pradeep Emily has done the editing for the film and the cinematography is done by Navaz.

Meghna Sunder Raj, who previously acted in Vinayan's movie 'Yakshiyum Njaanum' was not able to do much in that film other than show a lot of skin. But she has still managed to gather a lot of fans with her enchanting beauty and persona. This new film Raghuvinte Swantham Rasiya has given Meghna immense potential to prove herself in a role of substance. Charuhassan's character will be a pivotal one in bringing religious harmony among the people. The climax for this movie is said to be very powerful and one which will keep the audience at the edge of their seats. The film will force the society to think about its message and that fighting over petty religious issues is useless and brings no one any happiness. In today's society, there are many misconceptions about the Muslim community but this film will change the view of the audience in this matter.