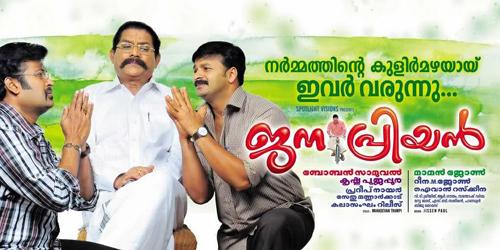 Janapriyan is a new Malayalam movie which has been released in the theatres on May 20th 2011. The hero of Janapriyan is Jayasurya and his heroine is Bhama. The word Janapriyan means 'loved by everyone'. The film has been directed by Boban Samuel and produced by Mamman John and Reena M John under the banner of Spotlight Vision. It is a movie which has equal proportions of comedy, drama, action and romance because of which it is expected to become a commercially huge masala movie hit. The movie has already hit the theatres and a good response has come from the audience all across Kerala. The rocking onscreen chemistry of Jayasurya and Manoj K Jayan is the highlight of this film. It is the second film after Ivar Vivahitharayal that Jayasurya and Bhama have been paired again. 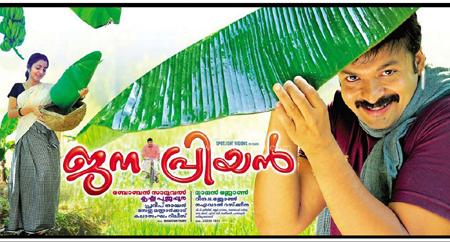 The plot of the movie revolves around the relationship between two brothers. The elder brother's role is played by Manoj K Jayan and the younger brother is Jayasurya. The interesting fact of this movie is that the elder brother tries to emulate the younger brother. He imitates his younger brother so that he can become like him and wishes to spend more time with him for this purpose. The story is very sweet and simple. Jayasurya plays the role of a village folk who is very talkative and has a talent of influencing people in a good way because of which he becomes a janapriyan (a person loved by all) to all the people who are close to him. Jayasurya's name in the film is Priyadarshan and he steals the show by portraying his character with ease. The role shows Jayasurya as a versatile actor. Bhama plays Jayasurya's love interest in the film. Manoj K Jayan has also done his role as the elder brother with perfection. He has surprised the audience with his wonderful performance at comedy.

Supporting cast and Technicians of Janapriyan

The script, dialogues and screenplay of Janapriyan have been done by Krishna Poojapura. The supporting cast of this film includes a set of experienced actors like Jagathy Sreekumar, Salim Kumar, Suraj Venjaramoodu, K.P.A.C Lalitha, Sarayu, Lalu Alex and Vijayaraghavan. The camera works have been handled by Pradeep Nair and V.T Sreejith Menon does the editing for the film. The songs for Janapriyan have been composed by Gautam Ghose for which the lyrics have been penned by Vayalar Sharathchandra Varma.