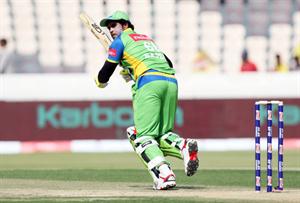 In one of the most close encounters of the Celebrity Cricket League, Mollywood team AMMA's Kerala Strikers defeated Bengal Tigers by 1 run. Bengal Tigers could reach only 148 for 4 wickets against the 149 posted by Strikers. Rajiv Pillai won the Man of the Match award for his well made half century. The match was thrilling from beggining to the end as much as a proffessional T20. Last two overs of the match were instrumental turned the match around. Rajiv Pillai, Vivek Gopan and Manikkuttan are the architects of Strikers' win.

Bengal Tigers won the toss and chose to field first. Rajeev Pillai and Nivin Pauly open the batting for Strikers. Pauly got out in the fourth over. He could only score 2 runs. Then Bala and Rajiv made a good partnership. Bala was run out at 15. Unni Mukundan couldn't last long as he was out for 5. But Rajiv Pillai was striking very hard at the other end. He scored his fifty in just 36 balls. But he fell at 59. Later Vivek Gopan and Prajod batted explosively. Vivek got out for 21. Kerala Strikers ended their innings for 149/6.

In reply batting, Bengal could make only a slow start, thanks to brilliant balling by Manikkuttan and Vivek Gopan. Tigers opener Joy was run out by Bineesh Kodiyeri at 13. Then Jishhu and Sandy batted well and made a big partnership. Manikkuttan took a superb catch to dismiss Sandy for 28. On the other side, Jisshu continued to strike and made a 25 ball fifty. But Jisshu's dismissal in last ball of 19th over, turned things around for a while. Jisshu had scored 69 runs then. Bengal Tigers needed only 10 runs to win. Unni Mukundan came to bowl the last over. In 3rd ball of the over, a wicket was fallen. Single came in next two balls and Bengal needed 4 runs to win in the last ball. The Tigers' batsman could take only a double in the ball.

The match was extremely heated up. The return of captain Mohanlal to the lineup made Kerala Strikers excited as well. The next match of Strikers is against Karnataka Bulldozers tomorrow.