We have three monsoons in our state. They are south-west monsoon, north-east monsoon and edavapathi. There are several details like atmospheric pressure, atmospheric humidity, the way and speed of wind, the variations in the pressure of the coastal area, the variations in the clouds that are situated in the sky and the vapour content in the atmospheric air. In ancient days in Kerala, the calculations about the rain are take place by means of these factors. Thus the idea of rainy seasons are as per the olden mythology is also followed in the modern days. 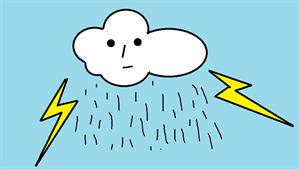 The rain which was not falls in south-west monsoon and north-east monsoon. But about 10% of rain is from the mid rain or eda mazha. It is also known as summer rain. January and April are the months in which the summer rain falls. There is an increase in the temperature of atmosphere after the summer rain. The rain falling that is associated with thunder storm and lightening is known as the thunder rain or edi mazha. When the temperature in the atmosphere increases, then the rain starts falling. And also the water we get from the edi mazha is more within a short duration. The rain starts before the thunderstorm and lightening occurs and then the rain drops that are bigger than that of the ordinary rain drops is starts falling. This is one of the rains that falls continuously without any break.

The rain which extends from the 15th edavam to 15th kanni is termed as the south-west monsoon or kaalavarsham. In the jubilee year of Kerala, about 60% of the rain is by means of south-west monsoon. There is a slight variation in this monsoon. But it is definitely started from first June. The south-west monsoon travels in the njattuvela's mainly karthika, rohini, makayiram, thiryvathira, punartham, pooyam and aayiliam. The main characteristic of south-west mansoon is to fall with a few breaks and starts raining. At this time the food substances has a special taste than that of in the normal conditions.

The rain which is extended from the month of thulam to the half of makayiram is termed as north-east monsoon. About 20% of the rain is achieved from our state from this monsoon. It is the only rain which starts from afternoon onwards to the night. Thulavarsham is another name of north-east monsoon. The wells are filled with water due to the north- east monsoon rain. Also the growth of mushroom is more in this rainy season. Chira muriyan, varambhu muriyan, kallurutti, and panthalorukki are the names that are used by the farmers to call the north-east monsoon.

Rain is one of the most necessary one for the betterment of all living things. Farmers prepare their field by means of the possibilities of rain. The living things are as much dependent on the essential water obtained through rain. Scarcity of water gets away by sufficient rain fall. So the knowledge about the monsoon is an effective tool for the development in agricultural and industrial field.

Read about monsoon season and healthy life style. Monsoon is back to wet our soil and spread its beauty. Never forget that along with beauty monsoon brings with it a set of diseases as well. Its always best to take precautions than to treat the disease after getting infected.

Although the monsoons or rainy season are most enjoyable, it is the main period in which health and skin diseases are most common. If one follows some simple tips during this season, he/she can enjoy the monsoons thoroughly. Read more to know the general health tips, nutritional tips, skin care tips and hair care tips for the monsoon season.

How to take care our skin during Monsoon?

Read about how to take care our skin during Monsoon? Nowadays most of the persons are conscious about their beauty.To maintain the beauty we should follow some routine in life.Sometimes you may feels like it is difficult to manage your skin problems. This article give some skin care tips that we should follow in Monsoon.

During the monsoons or rainy season, health problems such as skin diseases, water borne diseases, mosquito-borne disease and eye infections are very common. Read this article to know what are the health diseases that are common during monsoons. The articles also gives the symptoms, remedies and prevention of the diseases.