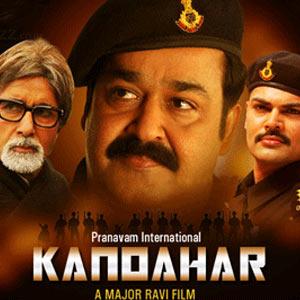 Major Ravi's fourth film Kandahar is released on December 16, 2010. This was the most expected film in this year. The Universal performer Mohanlal acts as the army officer Major Mahadevan in the third series of army films of Director Major Ravi. We can understand that Major ravi who directed this film, have taken much strain to finish the shooting. Especially the aerial scenes in flights which have been shot in Russia, are the eminent parts of the film

Though the first half of movie is going little bit slower than second half, it is a clean action thriller. The second half of the film showing the main portion of the story that is a war of Major Mahadevan and his buddies against international terrorists who hijacked Indian Airlines flight IC 814 and imposed the aircraft to land Kandahar. The following horrible scenes of terrorists' actions make viewers very frightened and anxious. In the end of the film, Major saves the innocent passengers who are scared in front of the terrorists in the flight and how gets back the flight from terrorists. 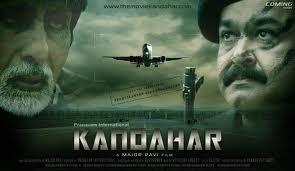 Real Lt. Cnl. Mohanlal's stunning performance in film as Major Mahadevan is especially to be mentioned. As a lead actor he has dealt fairly with his character. Bollywod star Amithab who debuted in Malayalam, performed his usual style. The emotional scenes between Big B and Mohanlal are touches hearts of viewers. The performance of Ganesh Venkataraman who handled the role of Captain Suryanath Sharma, an NSG Commando is also notable. His sentimental scenes with his father will wet the eyes of anyone who love the Nation. Incredible performances of Big B and Mohanlal in their combination of emotional scenes are added more value for the film. Ragini Dwivedi and Kavery Jha have played well as air hostess.

The very attractive elements of movie are the songs in 'which is composed by Shamir Tandon. There is a couple of loyal songs from him which is promptly striking in the hearts of viewers. The music of Kandhahar was selling off from the shelves as never had in Kerala. The emotional song 'Naman Hai' that sung by Sonu Nigam heaved the attraction of film. Kandahar will be shortly dubbed in Hindi and Tamil languages. Dr. Rasool Pookkutty who is the Oscar winner, have handled the sound tracks in this film.


The actions from Mohanlal and Ganesh is very much help this film to get in youth. The Shamir's songs are flowing like a breeze which carry love for nation, deep relations, and emotions throughout the film. He deserves high appreciation for those melodies. The film shows not only the deep relations between father and son but also the hard relationship which is rather than blood relationship between father of Captain Suryanath Sharma and his Major Mahadevan. Major Ravi the director is paying good attention for emotional and songs along with actions in his film. These qualities are also reflected drastically in Kandhahar.

First half is moving slowly when compare to second half. As an army film there is no more scope for comedy.

Rating of Kandhaharis 7 out of 10.