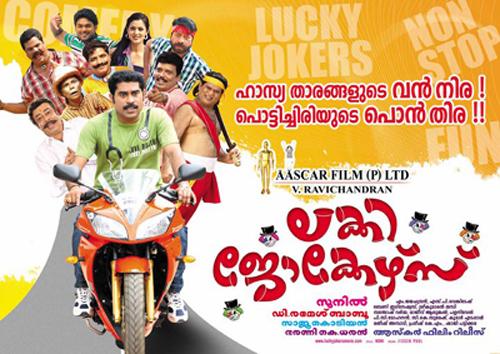 Lucky Jokers is a new Malayalam movie which was released on April 22nd 2011. A look at the cast of this film is enough to give the viewers a hint of the story of the movie. It is completely a comedy movie and the viewers will be lucky if they avoid watching this movie atleast in theatres. The main hero of this movie is Suraj Venjaramoodu who is portraying dual characters, one as a fraudster Swamiji Himagirisringan and the other one as a Tamilian goon by the name Narasimha Gounder. As far as the production and cast of this team is concerned, there would hardly have been any luck in terms of the money and the audience it could generate. Lucky Jokers is a chaotic film to say the least as the flow of the movie is not continuous. One could say that the comedy of the movie is plain senseless. The viewers would have to break their head to get head or tail of what exactly is happening in the story. The story starts happening at some place and then it moves on to a completely different scene which has no connection at all with the previous scenes.

The story of Lucky Jokers goes somewhat like this. The Vishnupuram palace ruler has been entrusted with an ancestral diamond which actually belongs to a royal Nepalese family. Needless to say, this diamond is worth a fortune. The room in which this diamond has been kept safely and only the eldest member of the palace (Madhu) has access to this room or chamber. Every year, during a celebration arranged by the Vishnupuram palace, this chamber is opened. This celebration mystically takes place at the same time when a Nepalese festival is also held. It was during one of these celebrations that the ruler's shrewd nephew goes with Madhu inside the chamber to obviously steal the diamond. He achieves this by hitting his uncle on the head making him faint. At the same time, an alleged Vasthu expert called Vishnu Sharman (Anoop menon) enters the palace and says that he has come searching for the diamond. Along with him, Vishal (Ajmal Ameer) and Lekshmi Thampuratti (Vidisha) have also come. After the ruler is attacked by his nephew, he falls into a coma. What follows after this scene can be analysed by the audience as per their wish. All the characters of the movie are behind the diamond and try all ways to lay their hands on it. The most amusing part is when one of the members of the palace (Saikumar) claims that he would start a new IPL team in Kerala with the money that he would get by selling off the diamond.

The entire comedian gang in Malayalam film industry comes into this story from nowhere and do some funny part or the others to make the audience laugh. The roles basically have no sense at all as far as the story of the film is concerned. Ultimately, there is so much comedy that you will find it 'not so funny' after a while. It looks like as though the actors are trying hard to make the audience laugh but fail each time. As mentioned before, one could say that the hero of this film is Suraj Venjaramoodu as he plays double roles. It is too much to digest a film which is entirely based on illogical happenings. Moreover, the film stretched to almost two and a half hours.

The person who has to be most commended for Lucky Jokers is the film's hair stylist. Though he cannot be seen on screen, his presence is felt throughout the movie as most of the characters have been made to wear really horrendous hair styles and wigs. More than the scenes in the film, it is these hairstyles which will make you laugh. Indrans' character is always seen with a neatly plaited lock. Both Anoop Menon and Saikumar have been made to wear terrible wigs. Since Suraj has two roles, he got the maximum potential to try out all the hairstyles available on this planet. As the readers must have understood by now, this is a nonsensical movie with absolutely no story. All the actors, or you could say comedians, have been placed in the film to show their potential in comedy by doing whatever humour they feel like. Nothing serious happens in the movie and the story just goes on like that in a comical manner till the end. It is best to keep your brains aside while watching this movie because you are not going to find any logic in it. I would recommend that if you are really in a mood to watch outright and senseless comedy without whacking your brains to understand the story, then this is a good movie to sit at home and watch at leisure.