C.N Balakrishnan is a prominent leader of congress party and whose main working area is Thrissur.

C.N Balakrishnan is the sixth son of Puzhakkal Chemangad Narayanan and Paruamma. He completed his education in Sree Ramakrishnasramam school. C.N Balakrishnan started his life as a Khadi worker. Later he married Thankamma 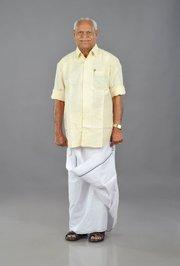 teacher who is a member of Arakkal family. Geetha Vijayan and Mini Balaram are children.

C.N Balakrishnan came in politics as a librarian of Puzhakkal library. C.N Balakrishnan was always with local peoples and he works a lot for Khadi industries and its development. He was association president of Kerala Khadi and village industries association for 32 years. In congress party, he was KPCC treasurer for many years. For thirty years he works in Thrissur and gives leadership to congress party in Thrissur and was also Thrissur DCC president for fifteen years. C.N Balakrishnan is also known as "congress manager" because of its ability to solve problems without hurting anyone.

C.N Balakrishnan came in election for the first time at an age of 75 and he was able to win from Wadakkanchery constituency in Kerala assembly election 2011. He defeated N.R.Balan of CPIM with 6685 votes.