Thiruvanchoor Radhakrishnan is a politician from Kerala who serves for Congress. He became MLA for five times and was minister in Water Resources, Forest, Health and Parliamentary affairs. Now he is the minister of revenue in Oommen Chandy ministry 2011. 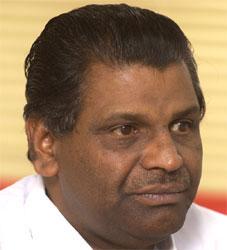 completed his LLB degree from Thiruvananthapuram government law college and worked as a advocate in Kottayam bar. Later he married Lalithambika and their childrens are Doctor Anupam Radhakrishnan, Athira Radhakrishnan and Arjun Radhakrishnan.

Thiruvanchoor Radhakrishnan came to politics through Congress students wing Kerala Students Union (KSU). He was KSU state president in 1974. Later he served as state general secretary and president of youth congress. He shows his leadership quality by serving as KPCC general secretary from 1984 to 2001. At present Thiruvanchoor Radhakrishnan is serving as AICC member, KPCC executive committee member and election committee member. He is also considered as a right hand of Oommen Chandy.

In Kerala assembly election 2011 he leaves his regular constituency Adoor and compete in Kottayam constituency. Thiruvanchoor Radhakrishnan was able to take back the constituency from LDF by defeating V.N.Vasavan of LDF with 711 votes.