Sneha Veedu Malayalam movie which had been projected to be the 300th movie of Mohanlal got released on 30th September 2011. Sathyan Anthikad who is the one of the leading movie director in Malayalam who has created a cult of being the 'Director of Family Audience' in his latest venture team up Malayalam Super star Mohanlal for the latest movie Sneha Veedu. This would be Sathyan's 51st movie as director. When Sathayan Anthikad and Mohanlal join together for a movie, the audience expects a lot from the duo. Let us know does the movie have some thing to share with the audience. 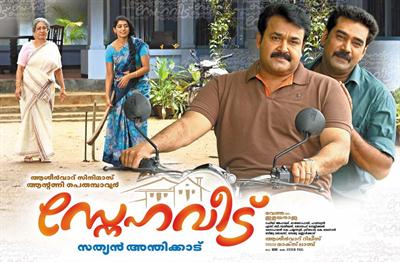 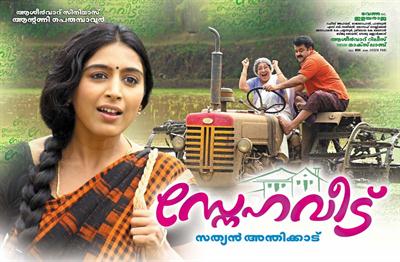 Ajayan(Mohanlal) has returned to Kerala after spending years working in Chennai,Mumbai and the Gulf. He spends his rest of the life at home with his mother Ammukutty (Sheela). Ajayan runs a factory which produces farm equipments. Ajayan has two thick friends; Balachandran(Biju Menon) a police officer and Chempil Ashokan who plays the role of a toddy tapper. A coconut trader Mathai(Innocent) and his wife Reethamma(KPSC Lalitha) stays near Ajayan's house. Ajayan who remains as a bachelor enjoys the world surrounded by the love of his mother and friends. Sunanda(Padmapriya) plays the role of Ajayan's friend. The entry of Karthik(Rahul Pillai) who claims to be the son of Ajayan bring darkness to his joy. The rest of the movie speaks about Ajayan's tactics to avoid the boy. 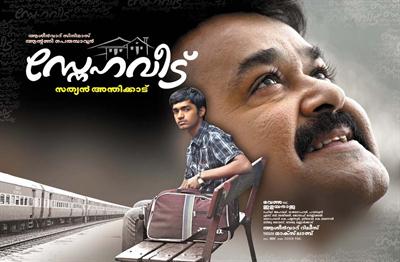 As seen in Sathayan's earlier movies this too tries to bring the inner beauty of a typical village. The movie tries to portraits the good relationship of people living in this village. As seen in the a typical Sathayan Anthikad movie we can expect the love and care which is being shared between the people. The suspense of the movie is being revealed after all the mess created by Karthik.
The best part seen is the combination of Mohanlal and Sheela which have worked a lot through out the movie. Mohanlal has proved to be the best actor with his lively performance in the movie. Sheela symbolically represents a mother who cares for his son. She yet again proves to handle roles which are much suit to her.

Rahul Pillai who plays the role of Karthik is an asset to Malayalam movie Industry. Being selected from among 50 youngsters this young talent born and brought up in Indore has mixed up with the character played by Mohanlal in the movie.

Other characters of the movie Innocent, Biju Menon, Padmapriya, Ashokan, KPSC Lalitha and Mamukoya did their role to the best. 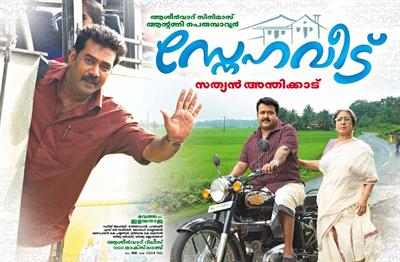 What we expect from a Satyan Anthikad movie is not much seen here. It's much sure that Malayalees have always admired him for almost all his ventures which even still remain in the mind. Especially all time hit movies like 'Varavelppu', 'Gandhi Nagar 2nd Street', 'Nadoodikkatu' etc tells simple thread of innocent hero. The second generation movie of Sathayan lacks the beauty which he has created during the recent past. 'Sneha Veedu' too lacks the original stardom created by Sathyan Anthikad. Even the thread of the movie fails to impress the audience. The climax portion of the movie fails a little bit to bring a complete satisfaction as much expected from the viewers. The songs of the movie are quite ok, but remember the old combination of Ilayaraja which he has used in previous movies of Anthikad. The movie tickles the audience with the presence of Innocent.

But the movie will entertain you if you wish to see a typical Sathayan Anthikad movie. Sneha Veedu has a good opening in Kerala and also overseas. Any way we recommend this movie for family audience.

About the Author of this Article

The author of this article has much credits in his name. Being completed post graduation in International Relations, History,Sociology & Education(M.Ed),still finds more space for him to study more. He is currently working for different sites as active Writer, SEO Expert.

Did you like reading this movie review? The author of this article had taken much pain in doing much research to bring up this article. Do you like to read more about Sneha Veedu? The author is ready to write more on it. Mean while do you like to congratulate him for his effort? Do give a credit to the author by using the social network buttons embedded here. Please share this article with your like ones.