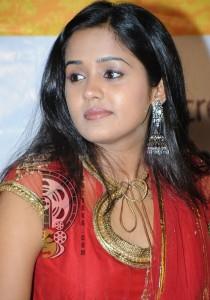 This is the spring season for marriages in Malayalam cinema. There has not been long since the marriages of Mamta Mohandas and Dhanya Mary Varghese took place. Now, another actress is getting ready to tie the knot. It's none other than new sensation Ananya. The young charming Ananya is going to wed Anjaneyan, a Thrissur based businessman. The engagement will be conducted on February 2nd at Ananya's home, as reported. Although it was reported that it is a love marriage, Ananya declined all the rumours and made it clear that it is an arranged marriage.

Ananya is the daughter of VN Gopalakrishnan Nair and Praseetha and grand daughter of CPI leader Kozhippuram Kaladharan. Her native place is Perumbavoor. She holds a Bachelor degree in English. She was first spotted by the directors while representing her college in the reality show 'Star Wars' broadcasted by Kairali channel. After declining a few offers initially, Ananya made her acting debut in Malayalam through the movie 'Positive' directed by VK Prakash in 2008.

Aayilya G Nair is her real name. The screenname Ananya was chosen later. She entered to Tamil industry through the film 'Naadodigal' the next year. The film, directed by Samuthirakkani, featured her alongside actor-director Sasikumar. The film was a huge hit and Ananya's performance was noted. She recieved a lot of appreciation and accolades. Then she went on to find a firm place in both the Mollywood and Kollywood with the films Shikkar, Seniors, Engeyum Eppothum and more.

Ananya is now busy with over a dozen projects including The Reporter, Dileep starrer 'Nadodi Mannan' and Johny Antony movie 'Masters' starring Prithviraj. She has also committed a film each in Kannada and Tamil. The marriage will be held only after the completion of these projects.