Manochitra is an upcoming actress in the South Indian movie industry. She has primarily concentrated on Tamil language films. She has also forayed into the Malayalam and Telugu movie industries. She made her debut in the Kollywood by acting in the Tamil movie Aval Peyar Thamizharisi. In this movie, she played a stupendous role. For her performance in the movie, she was nominated for the Best Debutante Actress Award by Vijay television, one of the popular television channels in the state of Tamil Nadu. She has been active in the film world since 2010. 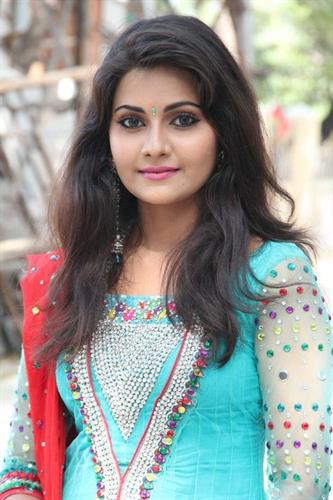 Manichitra was born into a Tamil family in the Kanchipuram district of North Tamil Nadu. Her other names are Nandhagi and Manumika. She had her formal education in a reputed school near her place of birth. With the completion of her formal education, she was enrolled in a reputed higher secondary school so that she could continue her education successfully. She continued her education along with her extra-curricular activities at the school level. During those school days, she somehow found time to take part in drama, mono act and bale competitions to keep alive her interest in acting and other soft skills. However, she did not let her education suffer on account of her taking part in cultural fora. Because of this attitude, she could get good grades in the SSC exam. After completing her SSC exam, she joined a local junior college to pursue her plus two course in commerce. There also she judiciously divided her time for education and the cultural activities. During these formative years, she sharpened her skills in acting and got accolades and moral support from her peer circle. In later years, she revealed that the moral support and encouragement given by her friends helped her to build self-belief in herself. However, she had no clue as to from where she could get a break.

Prelude to Her Entry into the Tamil Movie Industry


Manochitra alias Nandhagi was busy with her studies when she first met with the director Meera Kadhiravan at the famous Kanchipuram Kamachi Temple. At that time, she was visiting with her parents to offer prayers at the temple. At that temple the famous movie director Meera Kadhiravan had also come to offer the prayers and do some Pooja. After seeing her, the movie director was impressed by her personality and appearance. So, he decided to offer her a chance to act in his next movie. With this thing in mind, he approached and requested to take up this offer. During the meeting, he told her that she would be acting opposite to Jai in his next venture, if she accepted his offer. In the course of the meeting, he could convince her parents to give her node to accept this offer. With her father's consent, she decided to act in this movie. The name of the film in which she acted for the first time was Aval Peyar Thamizharasi.

Stint in the Tamil Movie Industry

During the production of the film Aval Peyar Thamizharisi, the movie director Meera Kathiravan asked Manochitra to avoid interviews. He instructed her to keep away from the media glare to maintain the suspense of her identity, before the film hit the screen. Due to maintaining of the suspense till the official launch, the film was able to draw some crowd. This enabled the movie to become an average grosser at the box office in the state. However, the film was able to win critical acclaim for its substance and the emotive nature of plots in it. Incidentally, the actress was able to get the positive acclaims from the ardent film critics and the general public. Keeping in view the public sentiment, the young actress was nominated for the Best Debutant Actress Award by the judges of Vijay TV, a popular television channel in the state of Tamil Nadu. Unfortunately, she did not get the award due to the stiff competition from other artists in the field. However, this gave her a moral boost to perform even better.

Immediately after the release of her first movie, Manochitra got another offer from another reputed director in the Tamil movie industry. In her second film, she began to work with a debutante director Ganesh. The name of the film was Thaandavakone. This film dealt with a totally different topic. In the plot of the movie, the protagonist of the movie takes up the role of a thief and his dealing with his mother who is the ardent devotee of Lord Shiva. In this film, she acted opposite to the chief protagonist. The third film in which Manochitra featured was Ithanai Naalai Engirundai. This film was directed by R. Balu. In this movie, the young actress acted opposite to Ananda Kannan. However, neither of the two films were released and they remained stuck in the production phase. Hence, they never got released on the silver screen. When the two films in which she acted did not hit the screen, she became choosy about the movie she would act. After a period of pause, she decided to sign an agreement for a film titled Kalingathubarani. In this movie, she acted along with Vimal, another newcomer in the movie field. However, her date with the hard luck continued and this film was also shelved at the production phase due to the lack of funds. In order to invite the lady luck, she even changed her name to Manochitra. Unfortunately, that also did not pay off. Due to the insistence of the film producer who ran out of the funds, the film production was shelved.

Due to the issues that was beyond her control, the young actress Manochitra's films did not go beyond the production stage. So, she decided to take some break from her acting career and wait for a chance to make her come back. Finally, she got an offer in the year 2013. After a long wait and properly doing the homework, she got convinced that the movie titled Netru Indru would really click. After an initial hesitation, she agreed to act in this multi-starrer movie. In this movie, she acted alongside Prasanna and Vimal. This movie was an action, adventure cum comedy movie. The other actors who acted alongside the young actress were Richard Rishi and Bharani of Naadodigal fame. The director of the film was Padmamagan. The producer of the movie was S. Malathy. The music of the film was scored by Rehhan. The film made some movements in the box office of the state. In the same year, she signed up another film directed by the noted film director Siva. In this film, she would be acting opposite to the super star Ajith Kumar. The film is untitled and the shooting of the film is yet to take off.

When Manochitra was getting some positive movements in the field of cinema in her home state, she was approached by new movie director Hyderali. The movie is a musical romantic movie. In this movie, she will be acting opposite to Anu Mohan. The music of the film is scored by Riyas Shah. The movie is expected to hit the silver screen on May 15, 2014. According to the words of the movie director, this movie will be musical romantic hit and would make the people dance to its tune. Let us hope for the best and wait for the movie to hit the screen across the state.

Manochitra is a newcomer in the field of acting. Though she had made a remarkable debut, she could not carry the momentum due to the problems that were beyond her control. The years such as 2011 and 2012 were lean years for her. During these years, the films in which she featured did not go beyond the production stage due to various problems, including the financial crisis. However, the year 2013 proved to bring back some luck for her with one of the films doing reasonably better at the box office of the state. She had also got a few projects up her sleeves, and a couple of movies preparing to hit the screen in the subsequent year. With things looking brighter, she aspires to become a successful actress in the near future. Apart from Tamil movies, she is acting in one Malayalam language and one Telugu language movies.