Roshan Basheer is an upcoming actor in the Malayalam movie industry. He is often referred to as the blue-eyed boy of the Mollywood. He had his debut in the year 2010 when he acted in the movie Plus Two. At that point in time, his expressive blue eyes did the rendezvous with the audience. With his expressive eyes and powerful dialogue delivery, he excelled and stood out in that movie. After that, there was some break in his career. He regained his momentum in the year 2013 when he got plenty of offers from both Mollywood and Kollywood. 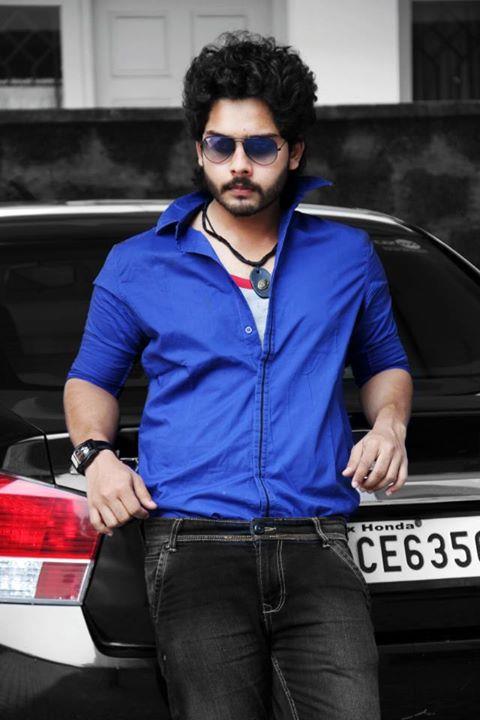 Roshan Basheer was born in the year 1990 to a well-to-do Muslim family in a tiny village hamlet in the Kozhikode district of North Kerala. His father's name is Kalanthan Basheer. He had his formal education near his house in the Kozhikode city. After a while, he was taken off from the school he was having the formal education and put him in a reputed school where he had the choice to continue up to the tenth class. During his school days, he never dreamt of making big in the film industry. According to his own words, the young actor's entry into the world was an accidental one. He was studious and gave importance to his education. In between, he used to take part in some school level cultural competitions, that too without any preparations. During such events, he was noted for his extempore and expressive acting. Due to his single-point devotion, he did well in his academics, right from middle school to high school. The high point in his secondary education was that he received good grades in SSLC examination and secured a seat in a reputed junior college of his choice in the city.

Roshan Basheer had the initial intention of becoming a doctor or an engineer. For this purpose, he took up the biology stream with Mathematics as an optional subject. But due to the chanced entry into the world of cinema, he had to shelve that plan and settle for a BSc degree course after completing his plus two course. That too he could do the degree and Plus two courses in a more leisurely manner, with the permission from the authorities of educational institutions where he studied. This was why he settled for a normal degree course, instead of a professional course. Though he took a break from his education for longer duration due to his busy shooting schedule, he was quick to come back and cover the lost ground with the help of his well-wishers in the class. Even the teachers understood his predicament and volunteered to help him out with their special classes and grace marks during the time of examination.

When Roshan Basheer was doing his plus two course, he was noticed by a movie director in one of his performances. He was moved and impressed by the spontaneous performances on the stage. The movie director had come to officiate an event that took place in his college premises. After the program was over, the director took the initiative and met the guy personally to congratulate him for his performance. In the midst of the discussion, he vaguely put forward his suggestion to act in a film. The bright young guy immediately recognized the gist of the suggestion and replied affirmatively. The movie director immediately wished to dish out his offer to act in a film directed by him. For this purpose, the filmmaker approached his father Kalanthan Basheer. Since the boy was appearing for the plus two exams, he chose not to reveal this to his son. After the exams were over and the results were awaited, his father told his son about this offer. Though he was happy about the offer that was extended to him, he was not sure about accepting it. At the time of accepting the offer, the young boy was skeptical about meeting the busy acting schedule and the attention his education demanded from him. Looking at the anxiety, the teachers and his peers pitched in with support. After getting convinced that the things can be managed and examinations can be written, he finally gave his nod for his entry into the world of cinema. When the offer finally materialized and he received the offer officially, the young lad was waiting for his plus two exam results.

Roshan Basheer finally accepted the offer after dispelling the doubts he had about his career. The maiden film in which he acted titled Plus Two. This film was directed by debutante filmmaker Shebi Chavakkadu. In this film, he co-starred with Shafna, Justine John, Vishnu Mohan, Sajin and Deepak Murali. The film discussed about the tale of youngsters who were doing a pre-university course. Before the release of the movie, it generated the positive remarks amongst the general public and film critics. Against this expectation, the movie had hit the silver screens in theatres across the state. The film was produced by Ramesh Babu under the banner of Risun Pictures. The background music of the film was scored by Kannan and the song music was composed by Manu Ramesan. Despite of its positive review, the movie did not impress the box office of the state. However, the main protagonists Roshan and Shafna could make some impact in the minds of the people. With this film, the actress Shafna could remove the image of a child artist and molded into a matured adult artist.

After the success of the maiden venture, the movie director decided to give another chance for Roshan Basheer in his next movie Tourist Home. In this movie, Roshan did a prominent, yet supportive, role. The producer of the movie was John Joseph. The film was produced under the banner of Mega Media. In this film, he shared the silver screen with Hemanth Menon, Sreejith Vijay, Meera Nandan, Sreejith Ravi, Rejith Menon, Kalabhavan Mani, Sarayu, Lena, Nedumudi Venu, etc. The main highlight of the movie was that entire story of the movie was made using a single shot. Arguably, it is still regarded as the first movie to be made using this technique. The music of the film will be scored by Jasnifer Maharoof.

Later Stint in the Mollywood


In the latter half of the year 2013, two more Roshan-featured movies got released. They were Red Wine and Drishyam. The first movie Red Wine was a non-linear investigative thriller whereas the second one was a more sober and family-based film. The film Red Wine was directed by Salam Bappu. The producer A.S. Gireesh Lal made this film under the banner of Gowri Meenakshi Movies. In this film, Roshan co-starred with Mohanlal, Asif Ali, Fahad Faazil, Mia, Saiju Kurup, etc. The film's background and music were scored by the noted music director Bijibal. In this film, Roshan assayed a prominent role. The movie featured him enacting a role of a pop singer who had a role model to emulate in his works. Between his appearance in Plus Two and Tourist Home, he was fortunate enough to get different roles in films. Few films that raised eyebrows include Rajasenan's "Innaanu Aa Kalyanam" and Banking Hours. In these films, Roshan had acted in slightly negative roles. Yet, the big actor in him chose to give best and his performance in these films was well appreciated by the film critics of the state.

The next film in which Roshan featured was Drishyam. This film was a Malayalam drama-thriller movie written and directed by Jeethu Joseph. In this movie, he featured alongside megastar Mohanlal, veteran actress Meena, Esther Anil, Ansiba Hassan, Siddique, Asha Sarath, etc. Roshan did his supporting and negative role to perfection in this movie. Mohanlal and Meena were doing the prominent roles in the film. Antony Perumbavoor produced this movie under the banner of Aashirwad Movies. The music of the film was composed by the duo of Anil Johnson and Vinu Thomas. The film became a huge commercial hit and it grossed to Rs. 16 crores within first two weeks of its release. Its popularity continued to galore. After some time, it became the first Malayalam feature film to enter into elite 50 crore club. Due to its bubbling popularity, it was given a number of awards and citations, including Kerala Film Critics Association Awards, Vanitha Film Awards, Asianet Film Awards, and Nana Film Awards. As before, the acting proficiency of this young actor was again revealed when he got entangled in couple of emotional sequences in the film.

Roshan Basheer is an upcoming actor in the Malayalam film world. In the short span of time, he could handle various roles to the perfection, ranging from the Hero stuff, supporting role to negative villain role. Hence, he could bag a number of acting assignments in a short span of 3 years. During this period, he was fortunate enough to act alongside megastar Mohanlal on two occasions. On both the occasions, he could get words of encouragement and laurel from the megastar. The young actor later said that he cherished the moments he had with Mohanlal. He also further added that he would follow the suggestions he had got from the megastar. His maiden film was Plus Two. Through this film, he could win the heart of the people through his acting and expressive blue eyes. He was able to impress the audience through his spontaneous acting.