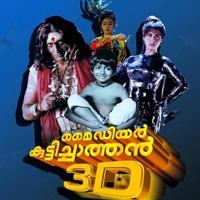 This is a story of 3 children coming across a Ghost (Kutti Chathan). The children make friendship with the Ghost. The Ghost is known as Kuttichathan (Kutti = child – small – little Chathan = ghost). In the Hindi version the film is named as Chhota Chetan. The villain of the film is a rouge magician. The role villain is played by Kottarakkara Sreedharan Nair. He owns the ghost. The Villain wants the Kuttichathan to get him a treasure. But the ghost though is owned by the villain, kills the evil magician in the end. Then the Kuttichathan turns itself into a bat and fly away. The Hindi Version of the Chhota Chetan is slightly different in the end. Instead of flying away it goes and joins the character played by Urmila Matondkar. This is a remake of the film in the same name. In 2010 A Tamil version was made with Prakash Raj and Santhanam (Tamil actors) under the name Chutti Chathan. The original make in Malayalam was in 1984 and remade in 1984. On both the occasions the film was not just a super hit but an all time Block Buster. This was the first 3- D film not only of Kerala but in the entire country itself. The remake of this 3 D film is expected to be released by Onam time. This remake is in digital 3 D format. The sound system is in D T S (Digital Theatre System), a multi channel sound technology.

Effects of the Film on Audience

The effect of the film in both the previous releases in audience was nothing short of a magic spell. The 3 D technology was first its kind in Indian films. The first time in 1984 it was absolutely spell binding and breathe taking as it was new technology in the entire country. It attracted the audience in hordes, a teeming crowd or a throng to the theatres where the film was running. This effect did not get diluted in the 2nd edition also. Hence the 2nd revision will attract much more forcefully the audience to the theatres where it will be running especially because it is not only 3 D, but it is in digital format and with DTS sound system which will make the audience to forget everything else till the duration of the film and further linger for some time in the minds. It can certainly expect to cast a magic spell on the Malayalees of Kerala and outside.

This remake can be expected to be super hit like its earlier versions.