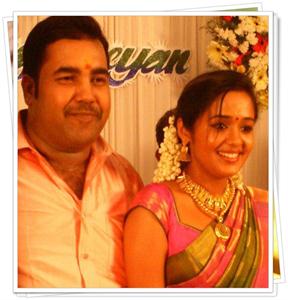 Wedding bells are ringing for Malayalam movie actresses as many of them are busy finding their life partners. Last few months had seen the line up of few leading malayalam actresses taking a break from location and getting engaged with their marriage. After the marriage of Mamta Mohandas and Dhanya Mary, now it is the turn of Ananya who is shifting her life from movie sets to the heart of Anjaneyan, an industrialist from Thrissur.

The engagement of Ananya and Anjaneyan was held at a simple function on 2nd February 2012 at IAM hall, Ernakulum which was attended by those who were near and dear to the couples. Anjaneyan who hails from Thrissur do have business wide spread in Banglore and Chennai.

Being one the active actress, Ananya is currently acting in 6 movies which include Malayalam, Tamil and Kannada. As though Ananya has not given dates for new movies, the decision to continue acting would be taken only after the marriage.

Ananya who started her acting debut through the malayalam movie Postive later turned to be one of the busiest actress in south India making her foot strong in Tamil, Telugu and Kannada movies. Ananya gave life to diverse characters in movies like Naadodikal(Tamil), Shikkar, Seniors, Kandahar, Doctor Love, Engeyum Eppodhum(Tamil). The simplicity of the actress in real life and also in the movies was well accepted by the family audience.

The upcoming movie of Ananya in malayalam are The Reporter, Masters, Ameya, Achan Balan Makan Bheeman, Mullamottum Mundiricharum and Gokulakrishna in kannada.