The highest-grossing Telugu film Maghadheera will be released in Malayalam as a dubbed version soon. Maghadheera is a critically acclaimed film directed by S.S.Rajamouli and having Ram Charan Tej and Kajal Aggarwal in lead roles. Most part of the film was filmed at Ramoji Film City in Hyderabad. Ramcharan, the son of Chiranjivi, entered in to the Malayalam industry with this film. We all know that tollywood actors like Allu Arjun have a very good fan base in Kerala. Now, it is the turn of Ram Charan after Allu. The heroine Kaajal Agarwaal also have a short fan base here. The last tamil film she acted, Nan Mahan Allai, was a great succees in Kerala. 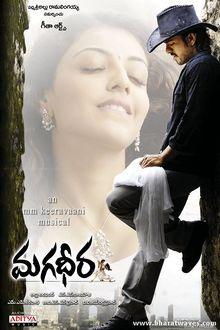 Maghadheera had won so many awards including the national award for the best feature film in Telugu and Filmfare Awards for Best Film.

Any way, I am sure Dheera will be a good watch to the true film lovers.

'Maghadheera'in Telugu has been rated as the first/second [opinions differ] greatest hit ever in the Tollywood in terms of gross collections.

The movie will be a novel treat for the eyes of the Malayalam viewers and Ram Charan[Chiranjeevi`s]son will be henceforth a familiar face for most.

'Maghadheera' is all about love of true kind,its eternity transcending births and the power of good winning over evil at the end.The dubbed version could better be titled as 'Veerapurushan/Dheeran' and not 'Dheera'as the latter is not a Malayalam equvalant.

Thanks for the response.It seems like that they are not sure about the name. May be it will change before the release.