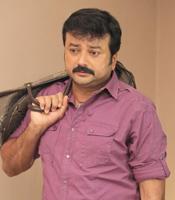 Makeup Man Padmashree Jayram's second Release of the year 2011,Kudumbasree travels Jayarams first release of the year didn't do well at the box office Make Up man first after he honoured with Padmashree in the Year 2011. Director Shafi is teaming with Jayram after a long gap of 8 years; it was One man Show which they done together before the movie Makeup man.

Shafi had good beginning to the year 2011 with his blockbuster movie "Marykkundoru Kunjadu". Maryjkkundotru kujadu is successfully running all over Kerala, it is biggest hit of the year so far. Sachi Sethu team writers of Shafi's hit movie Chocolates are doing the script for Makeup man. Super Star Prithvi Raj and Kunjako Boban are doing cameo in Makeup Man

Makeup man is telling the story of cinema with in cinema after the movies like Udayananu Tharam and chadikkatachandu. Sheela Kaul shares the screen with Padmasree Jayaram in the 2011 release Makeup man. Sheel Kaul plays the role of the Cine Actress Anamika and Jayram as her Make Up man Balu. Siddique is doing the role film director Sidharth.

Balu is an MBA degree holder who failed in his all effort to make a good living, he attempted to all he can do but failed miserably and finally finds resort in the movie industry with the help of his friend Kichu Manjali, he becomes assistant to Lawrence a senor make up man in the industry. He becomes a private make u man to Sheela kaul . The story movie with the issues that surfaces in the relation between Balu (Jay Ram) and Anamika(sheela Kaul )

Makeup man was expected to release to release in the first week of February but the shoot got delayed due Prithvi Raj's availability. Makeup Man is all set to release across Kerala in the 11th of February this Year.