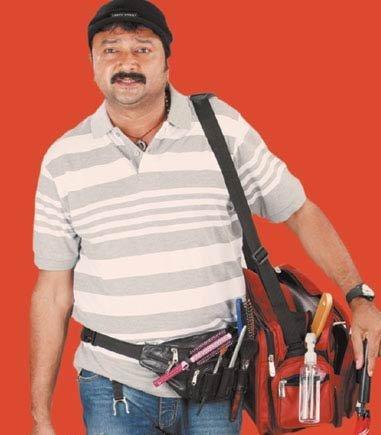 Makeup man , latest movie directed by Shafi and Jayram , sheela kaul in lead is ready to hit theatres on 11th of this February. Shafi is teaming with Jayram after his 2003 movie One man show. Sahafis favourite writers sachi -sethu team is penning the script of Makeup man. Shafi is expecting his second straight hit of 2011 after the blockbuster movie MarykkndoruKunjadu.

Makeup man belong to the league of movies that telling the story with in the movie. Jayram plays the character of Makeup man Balu. Balu is an MBA graduate, who failed in all his attempts to earn his living. His situations brought him to the film industry as a Makeup man. He joins as an assistant to Lawrence a senior Makeup man. Balu got appointed as personal makeup man to Anamika (Sheela Kaul). Movie industry is alien to balu the movie progresses with the hilarious moments of balu who ended up in a totally strange profession

The relation between Makeup man balu and the cine actress Anamika deepens from then on. Baliu becomes an integral part of her life. More specifically they fall for each other. But like in every other story the crook around doesn't like their relation. They starts to plot against Balu , at a point of time Balu has to leave Anamika due the compelling situations

Makeup man is addressing the bad practises inside the film industry. The back ground politics politics of movie industry is told with an essence of comedy. Makeup Manwas shot in Thiruanantha puram, Kochi and Hyderabad. The song sequences of Makeup Man was shot in Singapore