Mammootty Fans who are waiting for the release of Megastar's most expected film of 2011, August 15, has to wait some more time since the release of this film postponed to March 24 of this year. Early, the film was going to release from February 14 and all theaters were ready to welcome the return of Perumaal IPS. But the later buzz from the producers cleared that the film will make a release only in march Last week. 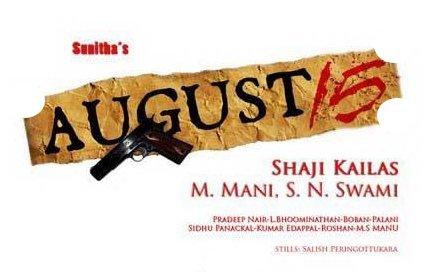 It is 3rd time the release of August 15 shifted. It was originally slated as Mammootty's Christmas Release. But because of the rain occurred in Trivandrum, the film's shooting couldn't completed within time. So, the release shifted to January. But it couldn't happen, the reason they gave is the release of some other movies of M&M's. The producer Aroma Mani promised the release of August 15 in February 14. Now, it again changed. There are mainly two rumors spread about the shifting. The first one is the time which the movie going to release. If the movie will release in March last week, it can collect more than now because of the vacation season. Also, the peoples who viewed the preview of the movie, opined that the movie is an excellent one. So the best time to release it is the vacation season. The second rumor is that February seems to be not good for Aroma Mani. His last release Drona with the same team(Shaji Kailas-Mammootty) was a big flop. It was also released in February. So Mani feared to release August 15 in this February.

August 15 is a sequel to the old Super hit August 1 which was directed by Sibi Malayil. August 15 is the most expected film among the upcoming movies of Mammootty in 2011. Mammootty has two heroines in this movie-Swetha menon and Meghna Raj(Yakshiyum Njanum Fame). The movie which said to be a investigative crime thriller has a big supporting cast include Siddique, Thalaivasal Vijay, Lalu Alex, Balachandran chullikad etc. Mammootty plays the same character Perumal IPS of the film August 1. Perumaal IPS, popular for his getup and super cop role in August 1, was a feather in acting career of Mammootty. So, Mammootty fans eagerly waiting for the return of Perumal IPS with his new mission.